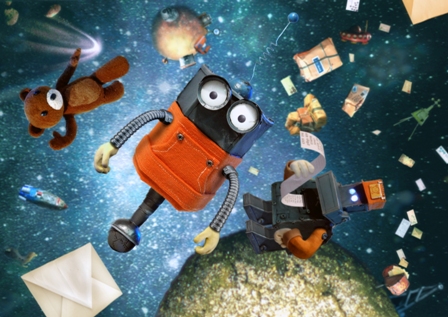 Sirius Express Ltd. handles space freight to all destinations in the universe. Bureaucrat robot X-Mo and mailman robot Io work in the Special Deliveries´ Department. Io and X-Mo deliver the most challenging parcels with their shabby mail shuttle. The work takes them on adventures into the wilderness of outer space. Io, who under his metal crust is a sentimental dreamer, finds himself lonely when working with orderly X-Mo, whose passion is listing and organizing the deliveries. Io´s despair suddenly ends when the mail shuttle bumps into an unidentified parcel. Inside the parcel Io finds a dusty teddy bear who appears to be lifeless. Io reloads the teddy bear´s batteries, and Bingo the bear wakes up from his long sleep. In the cuddly bear Io sees the friend he has longed for, until Bingo´s true character is revealed. The energetic super-powered rascal turns out to be the cause of different catastrophes, up to the point of jeopardizing Io´s and X-Mo´s life. The newborn friendship is put to trial. However, in the end it´s only Bingo who has the means to try to save them from a dreadful death – his only weapon being his wittiness and energy.