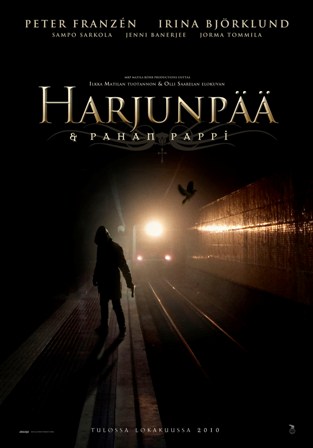 Domestic title:
Harjunpää ja pahan pappi
Category:
Feature films
Script:
Leo Viirret
Director:
Olli Saarela
Producer:
Ilkka Matila
Premiere:
29.10.2010
FFF support:
€700000
Budget:
€1775330
Description:
The Priest of Evil is a crime thriller for this new decade. It is based on the book by the same name, written by Detective Sergeant Matti Yrjänä Joensuu. The critically acclaimed Joensuu is one of Finland´s top crime writers, and The Priest of Evil was the best-selling Finnish novel of 2003. His work has been translated into several languages and many have also been dramatized into movies, TV series, radio dramas and plays. Producer Ilkka Matila and scriptwriter Leo Viirret have been working on a film adaptation of the novel since 2002.

The lead character in the movie is the same as in Matti Yrjänä Joensuu´s series of crime thrillers: Detective Sergeant Timo Harjunpää of the Helsinki Violent Crimes Unit. He is an honest and conscientious cop, one of the city´s very best, who loses his daughter in tragic circumstances. Despite the support he receives from his colleague, Constable Onerva Nykänen, Harjunpää is unable to recover from his loss. While he looks for a way to assasinate his daughter´s killer, he works on various cases involving strange deaths at Helsinki´s metro stations, eventually determining them to be serial killings. But while he seems to get closer to the killer, the killer is actually getting closer to him. Harjunpää must find the murderer and as he tracks him down, Harjunpää encounters an overwhelming darkness both within himself and without.